YouTube Vlogs: ItsJBoTime! I watched as senior David Barton tried to blink without raising his eyebrows. David thought that your eyebrows move when you wink but not when you blink. I realized that, if you look closer, there’s more that meets the eye. I captured this through the lens of my Vlog on September 8. This is just one of my Vlog’s: It’sJBOTime!, where I make mundane, humorous, social experiments--asking girls, for example, if it was ok for a girl to ask a guy to Hom

Gabi wilson better known by her stage name H.E.R. (Acronym for Having Everything Revealed) is a 20 year old African-american R&B/Alternative R&B singer-songwriter from Vallejo, California. She was Born June 27th, 1997. She signed to RCA records and has two EP’s (Extended Plays) self titled H.E.R. The first Vol. being her debut project was released September 9th, 2016 and vol.2 being released June 16th 2017. This October she released the B-sides of both Vol.1 and Vol.2 on the

The new stadium for the Detroit Pistons and other Detroit teams, the Little Cesar’s arena, is a much newer, state-of-the art arena with many restaurants, stores and other entertainment options including a variety of places for everyone to eat and many social places gather with your friends and family. Many fans had doubts about moving downtown, but most people are excited about going to the up and coming District Detroit Area. The new stadium is rumored to have the largest j

Sophomore Keller Kanat and sophomore Katie Lucken were both inspired to join Groves’ cross country team for the same reason: talented older sisters. Both Kanat and Lucken watched their sisters train for meets at a young age and wanted to emulate their sisters’ determination during races. “My sister did cross country, and I had been going to her meets,” Kanat said. “I loved how close and upbeat everyone was. This year I choose to do it because I loved how it gives me somethin

Senior Ashley Stewart-Smith looks forward to dancing in the 8-minute finale, despite being injured and discusses what makes this year's fall musical especially interesting and challenging. 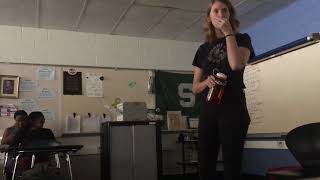 Paige Robnett visits the History of America's Women class to give a presentation about the AAUW organization on October 20th. She spoke about modern feminism, injustices in the workplace, and common sexist language used in schools and businesses. In this video, you hear her targeting micro behaviors that she claims to have a huge effect on women. Students in the class offer personal examples and further insight.

Q&A With YouTuber and Sophomore at Groves High School Peechos

Sophomore Will Hess, or Peechos, tries to balance his school life with his YouTube channel Aspiring content creator and YouTube star William Hess, or Peechos as he’s known by his 87 subscribers, is working hard to create a channel where he can share what he loves with other people. He has agreed to participate in a Q&A session to help people understand more about his channel and how he can share his life with his fans. Check out his channel here: Q what inspired you to start

Daniel Caesar, born April 5, 1995. After independently building an online following through EPs, Caesar released his debut album Freudian in August 2017.Daniel Caesar In his debut album Freudian, delivers songs that take you on various adventures. In the Album's leading single “Get You( feat. Kali Uchis)” Caesar give us a funky soulful vibe spilling out his love for his soulmate and the disbelief that he actually has her. Caesar, 22 and Canadian native released his first sin
1
23

How to train hard for virtual and at home sports

Everything is Not What it Seams: Behind the Scenes of short, Horror Film, "We Need to do Something"

Get to Know the Staff: Halloween Edition

This year's powderpuff game raises over $2000 for Gigi's Playhouse

Why Personal Finance Should be a Requirement